In this article, I will give information regarding Parkinson’s disease.

This topic was described by James Parkinson. So, this disease is called Parkinson’s disease. It is neurodegenerative disease. 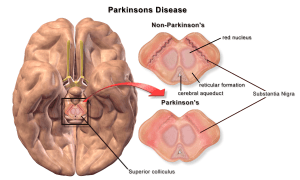 Neuro = Neuron (brain cell)
Degenerative = destroy
It simply means, in this disease there is destroying of brain cells. Location of breakdown of brain cells occured in basal ganglion part.

Brain cell damage in the brain causes dopamine levels to drop. As a result patient may suffer from complain like tremoring, rigidity, slowness of movement, etc.

Parkinson’s disease mostly occur at/after the age of 60 years.  It is slow progressive disease. Symptom not appear over night, it takes years to be problematic to patient. Only 2 persons / 1000 people suffer from this disease.

We learn this disease, in below format

There is no tests can conclusively show that you have Parkinson’s disease. No blood test or other tests will help to do so. Mostly, diagnosis made by sign & symptoms, medical history and a detailed physical examination.

CT scan, MRI helpful to rule out other neurological diseases.

Although there is no cure for Parkinson’s disease, treatment will help to reduce the main symptoms and maintain quality of life for as long as possible.

ABOUT US
HEALTH IS IN YOUR HAND. BE YOUR DOCTOR FOR BETTER HEALTHY LIFE.
Contact us: [email protected]
FOLLOW US
© 2019 Be your Doctor
MORE STORIES