Neurotransmitter is a chemical substance that acts as a mediator for the transmission of nerve impulse from one neuron to another neuron through a synapse.

In our body, neurons are not anatomically connected. It is physiological continuation. There is gap between two neurons. Message pass from one neuron to another neuron, although there is gap in between. It is because of chemical named as neurotransmitter. 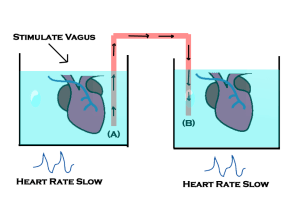 As you can see in image that connection between chamber in such a way that fluid from chamber A can flow into chamber B.

When he electrically stimulate the vagus nerve of frog A, he finds that there is slowing of heart rate. After a short delay, the heart rate of frog B also comes down. It happens after short delay because fluid from chamber A comes to chamber B with short delay.

It directly means that there is something releases from vagus nerve of frog A. He named it as ‘vagusstoff’. Later this chemical is known as a neurotransmitter.

It must be found, produce and release by neuron.

After release, it must act on a target area and produce some biological effect.

After the action, it must be inactivated.

Depending Upon Chemical Nature

According to chemical nature, there are three types mention as below.

Neurotransmitter of this group have fast synaptic transmission and are excitatory and inhibitory in action. Below chemicals are of aminoacid group.

Some neurotransmitters do not fit into catagory of aminoacids or amines. That are mention in others group.

When inhibitory neurotransmitter like GABA releases in presynaptic neuron, it causes chloride ion entry in postsynaptic neuron. Chloride ion means Cl- & it makes negetivity there. Once negetivity develops, message can not pass further. This process is known as IPSP. 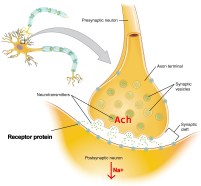 It is cholinergic neurotransmitter. Ach produces the excitatory functions by opening the ligand sodium channel.

Acetylcholine is not live for long time in neuron. Within 1 millisecond after release from vesicles, it hydrolysed into Acetate + Choline. Gamma-aminobutyric acid (GABA) is an inhibitory neurotransmitter in synapses particularly in central nervous system. It means that this chemical blocks or inhibits certain brain signals and decreases the activity in your nervous system.

GABA causes synaptic inhibition by opening potassium channels and chloride channels. So, potassium comes out of synapse and chloride enters in. This leads to hyperpolarization, which is known as IPSP (Inhibitory postsynaptic potential).

It is type of neurotransmitter which have Inhibitory action. Dopamine helps us in many ways, it controls many functions of our body mentioning below.

If deficiency of this chemical occurs than we may suffer from disease like Parkinson’s disease in which rigidity, tremoring, stiffness occurs.

Serotonin maintain our mood. Whenever this chemical decreases, it causes mood changes, anxiety, and depression.

ABOUT US
HEALTH IS IN YOUR HAND. BE YOUR DOCTOR FOR BETTER HEALTHY LIFE.
Contact us: [email protected]
FOLLOW US
© 2019 Be your Doctor
MORE STORIES

Hemostasis – How blood stops after injury